Previous Next
Today’s preview is dedicated to watch from MB&F. As you can guess, word “watch” is a crude underestimation of what you will see on the photos. This is a new HM6 Alien Nation. Yes, it is based on well-known model, which looks truly unusual.
By the way, here you can read review with latest creation from MB&F.
Don’t forget to like our Facebook page, so that you can get fresh articles on time. 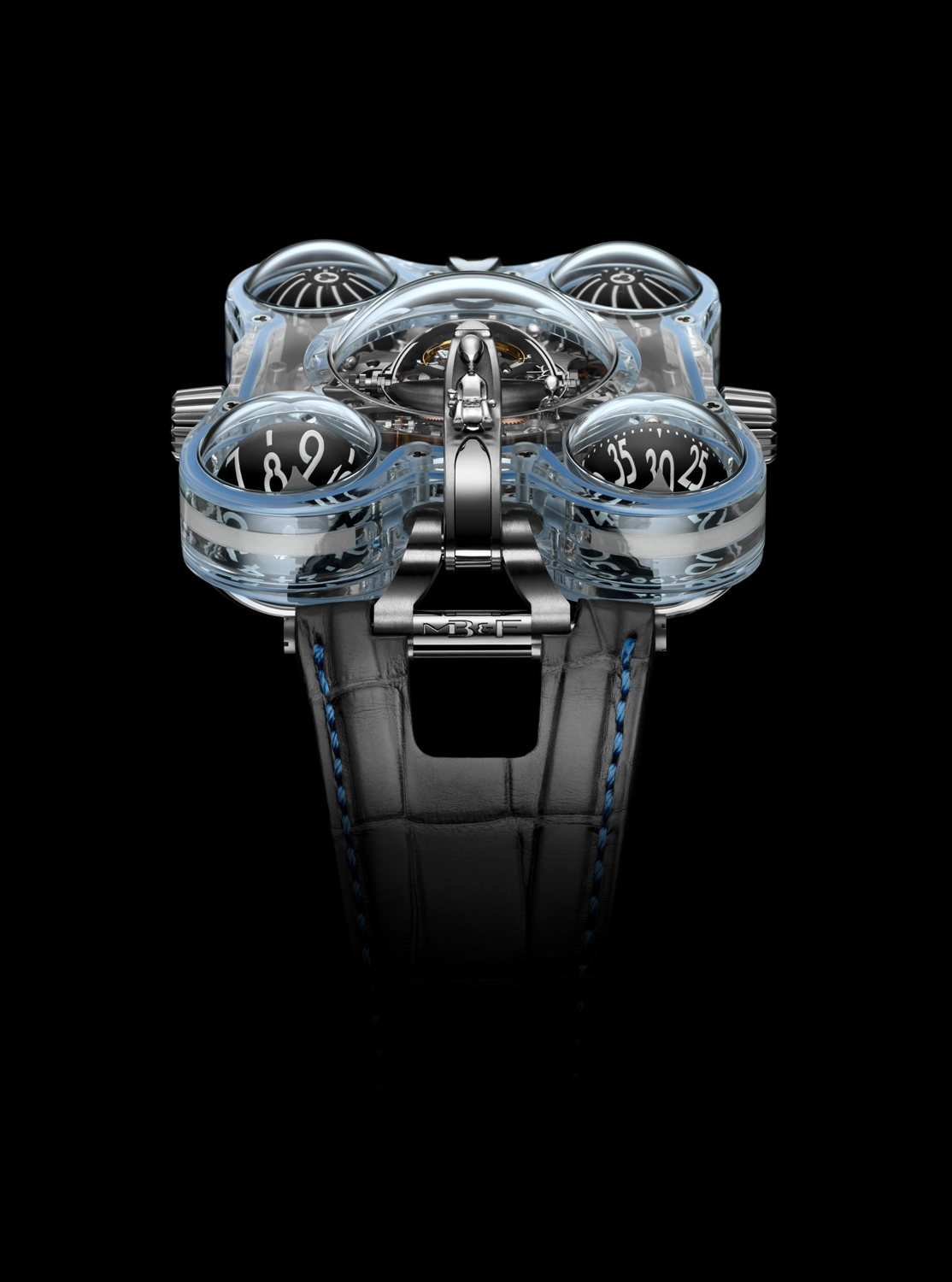 Even though original HM6 feature more than 400 parts inside, and there were several limited editions, Swiss watchmaker still decided to invent something new. Yes, there were two versions, which used different precious metals in order to show exquisite internals. The only explanation to HM6 Alien Nation is that its creators decided to push boundaries and create even more crazy and beautiful timepiece. There is no need to use any numbers in case of this watch, and if you are searching for such data – this model is definitely not for you. 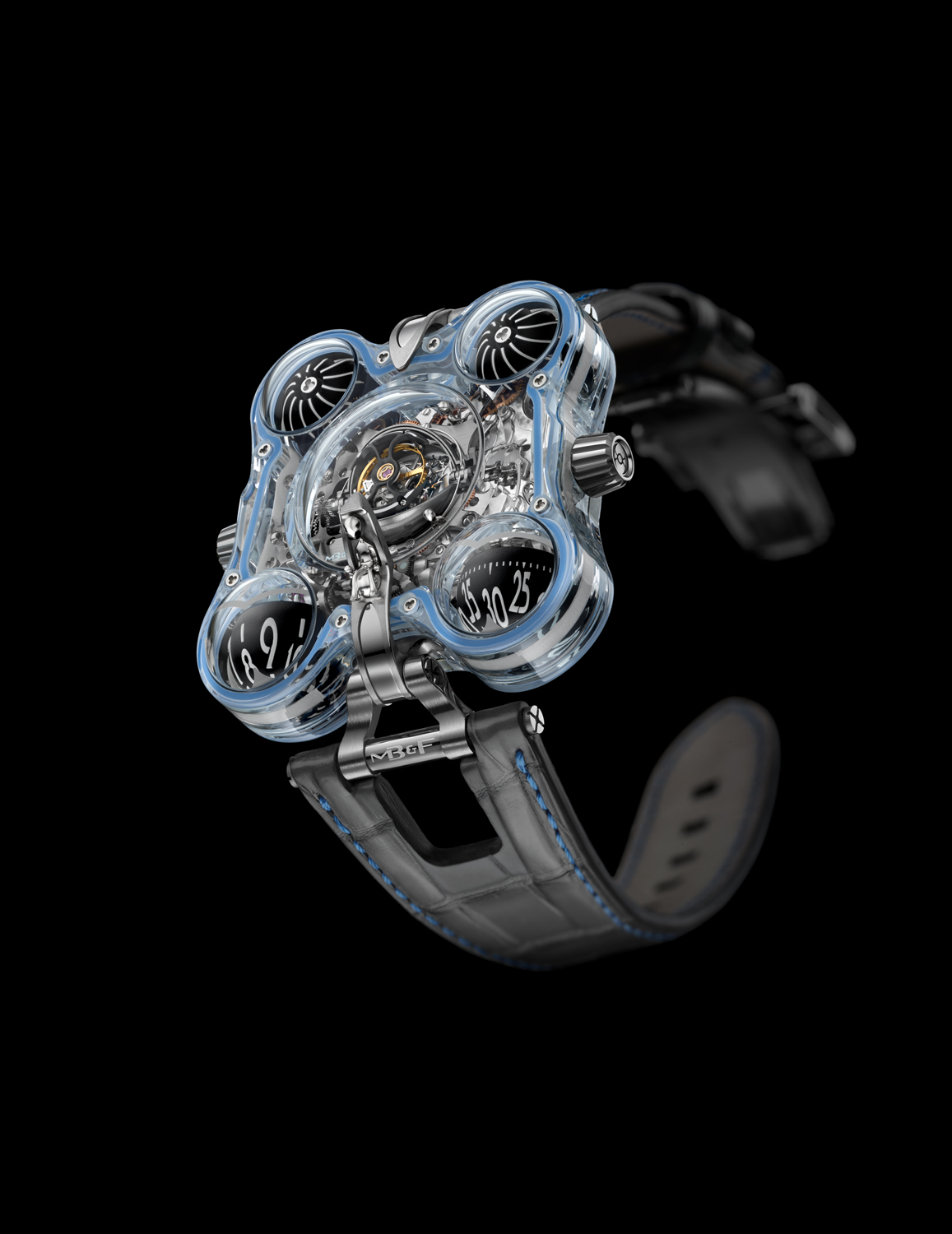 Now take a look at watch case, do you notice anything unusual? 🙂 Right, whole “body” of this watch is transparent and made out of sapphire. No, it’s not one piece, there are actually 12 of them combined together. We understand that such assembly should be smooth and seamless, so that whole construction looks like solid part. It is safe to say that authors perfectly executed this task, and now you can see every corner of HM6 Alien Nation. To impress you even more manufacturer states that one case takes 500 hours to be produced, sanded and look like what we see on the photos. 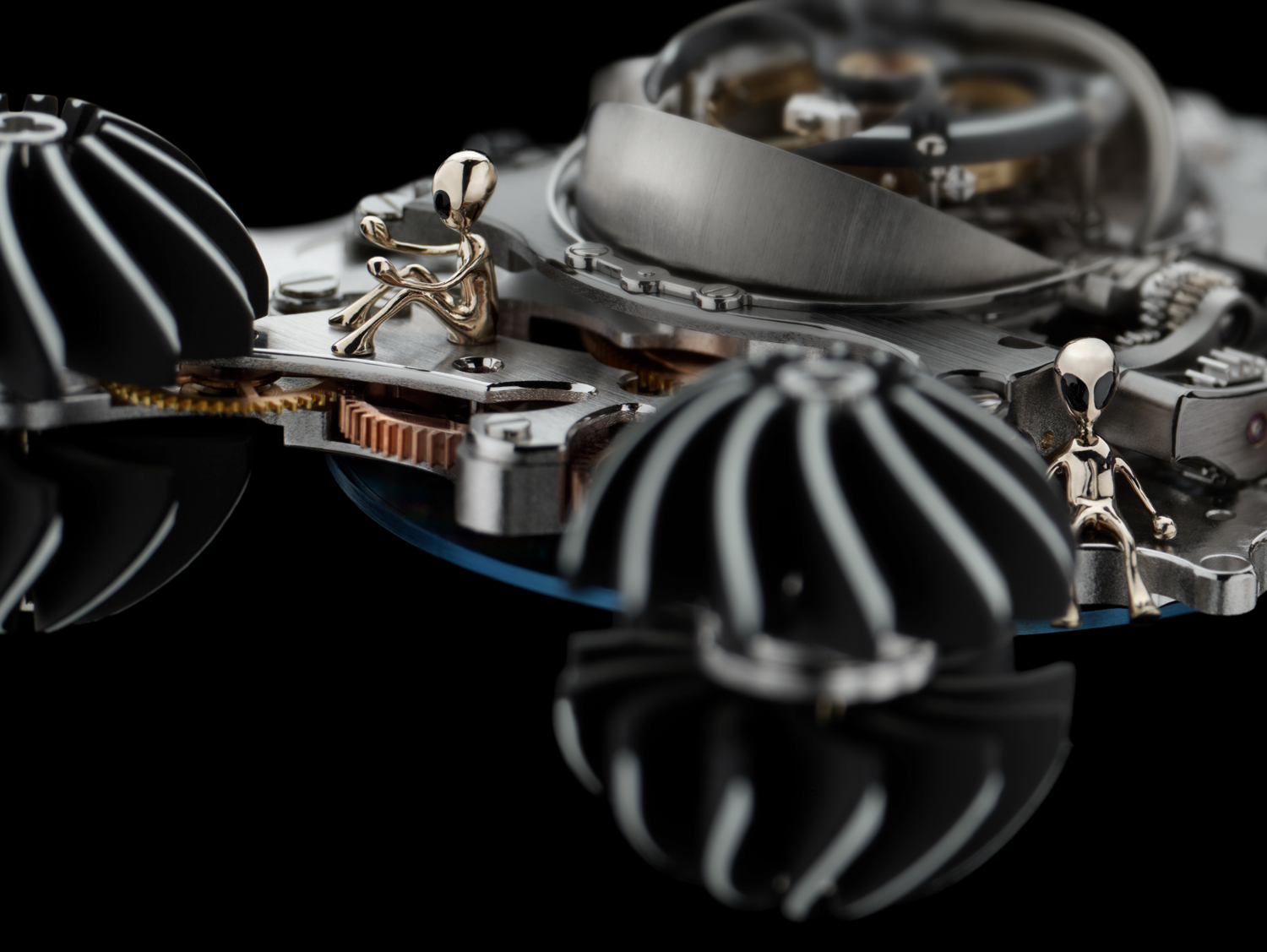 Next feature here – luminosity, which is not like on any other timepiece. Different parts are highlighted with help of Luminova and special component combination. Remember last year Badger Limited Editions? Yes, that’s the same thing, and believe me – such finish gives even more astonishing glow in the dark. Now this covering is called as AGT ultra, what means Ambient Glow Technology. Of course, this effect will benefit overall unusual design. We all love good bright lume, right? 😉 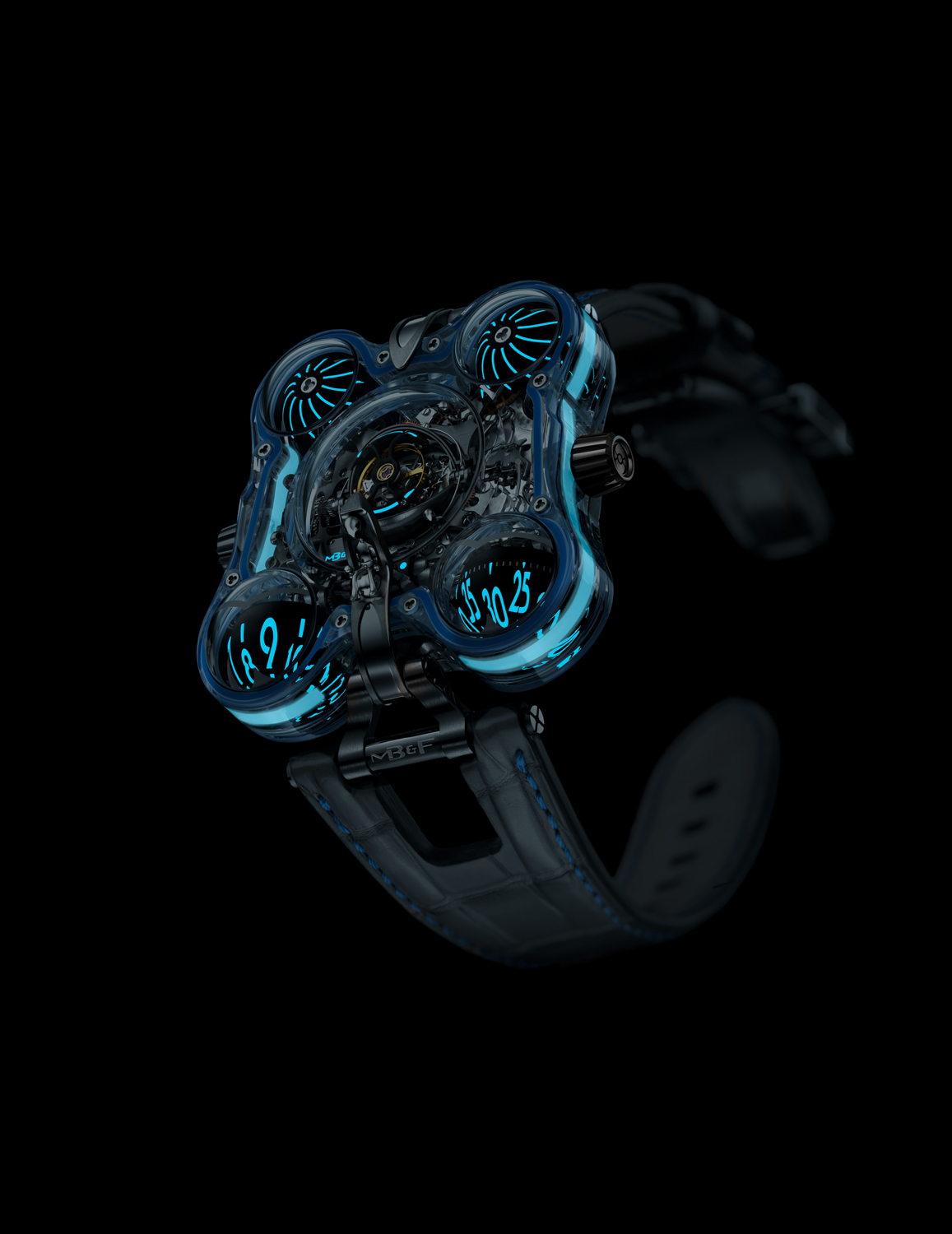 That’s not all, take a careful look inside HM6 Alien Nation, and you will notice several figurines. Those represent alien spaceship crew and made out of white gold. Not impressed? Then just imagine that neck of each is thinner than grain of sand. Of course, such fine craftsmanship will require notable amount of time spent. I am not sure if such feature will be the main reason to get this watch, but it’s still a nice touch. 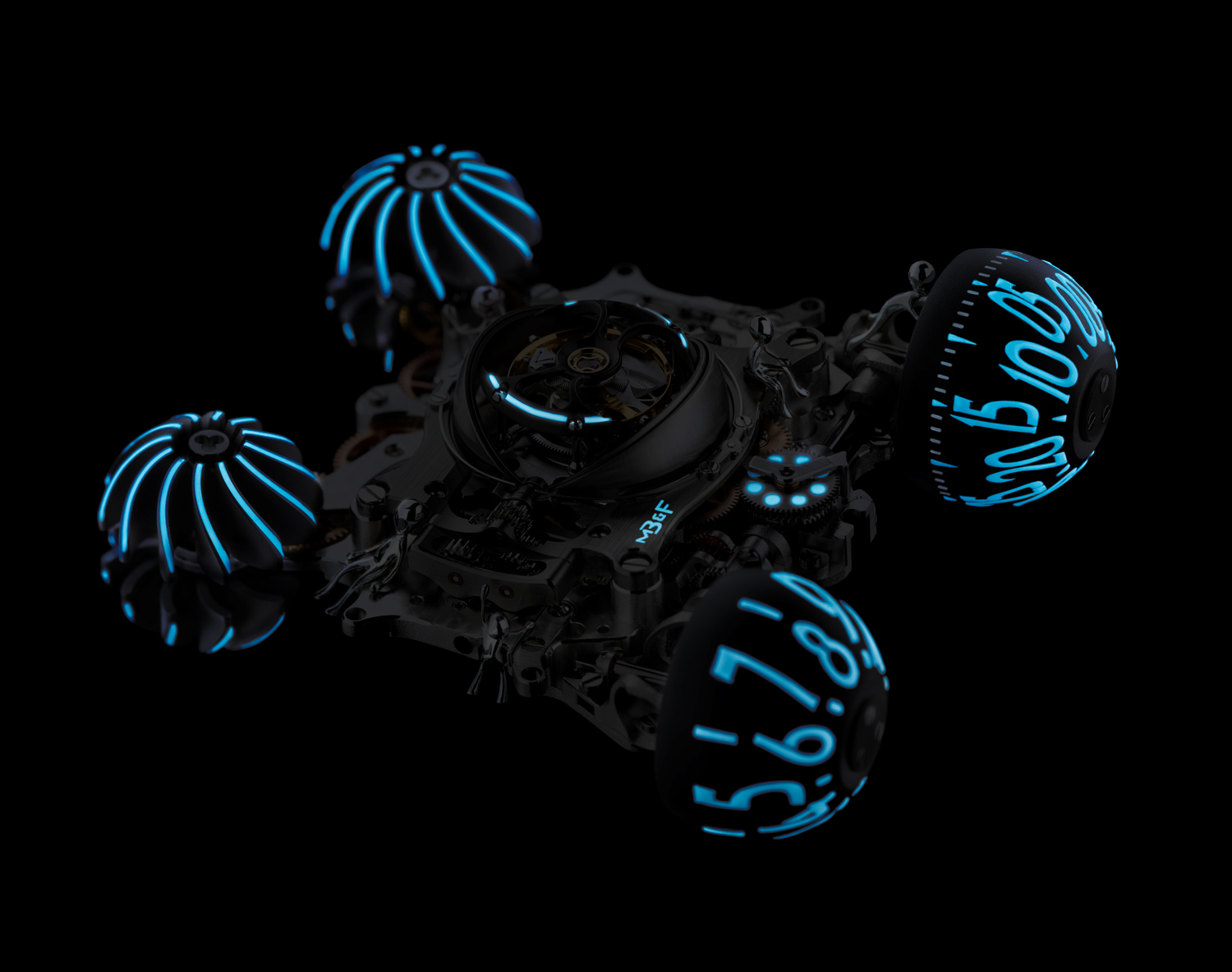 Now some of you might be thinking about final price of this model, right? Well, I would rather mention amount of HM6 Alien Nation that will be produced – 4 pieces! Yes, only four, and if you are still wondering about the price tag, this timepiece is definitely not for you. Moreover, I hope at least one will be actually worn on the wrist and not used as untouchable grail in somebody’s collection.‎

[…] buyers have something more impressive than just rebadged S-class in form of Maybach. By the way, here you can read another interesting report. Don’t forget to like our Facebook page, so that you can get fresh articles on […]

[…] Novelty was announced recently and underlines cooperation between two entities. By the way, here you can read review with another interesting watch. As usual, don’t forget to like our Facebook page, so that you can get fresh articles on […]

[…] watch features HM8 base. Watch exists in one piece only, so let’s take a look at it. By the way, here you can read article with another MB&F watch. Don’t forget to like our Facebook page, so that you can get fresh articles on […]