Today’s review won’t be dedicated to expensive watches, we are going to talk about Manfrotto Universal Smartphone Clamp. My other project involves live-stream videos, and I usually shoot them with mobile phone. Well, first choice to place phone on the tripod was chinese mobile phone clamp. Should I even mention that it broke after 6 months of heavy usage. Now I was determined to find something serious and long-lasting, so new clamp was purchased. Is it good? Let’s take a closer look.
By the way, here you can read review with nice photobook from Saal Digital.
Don’t forget to like our Facebook page, so that you can get fresh articles on time. 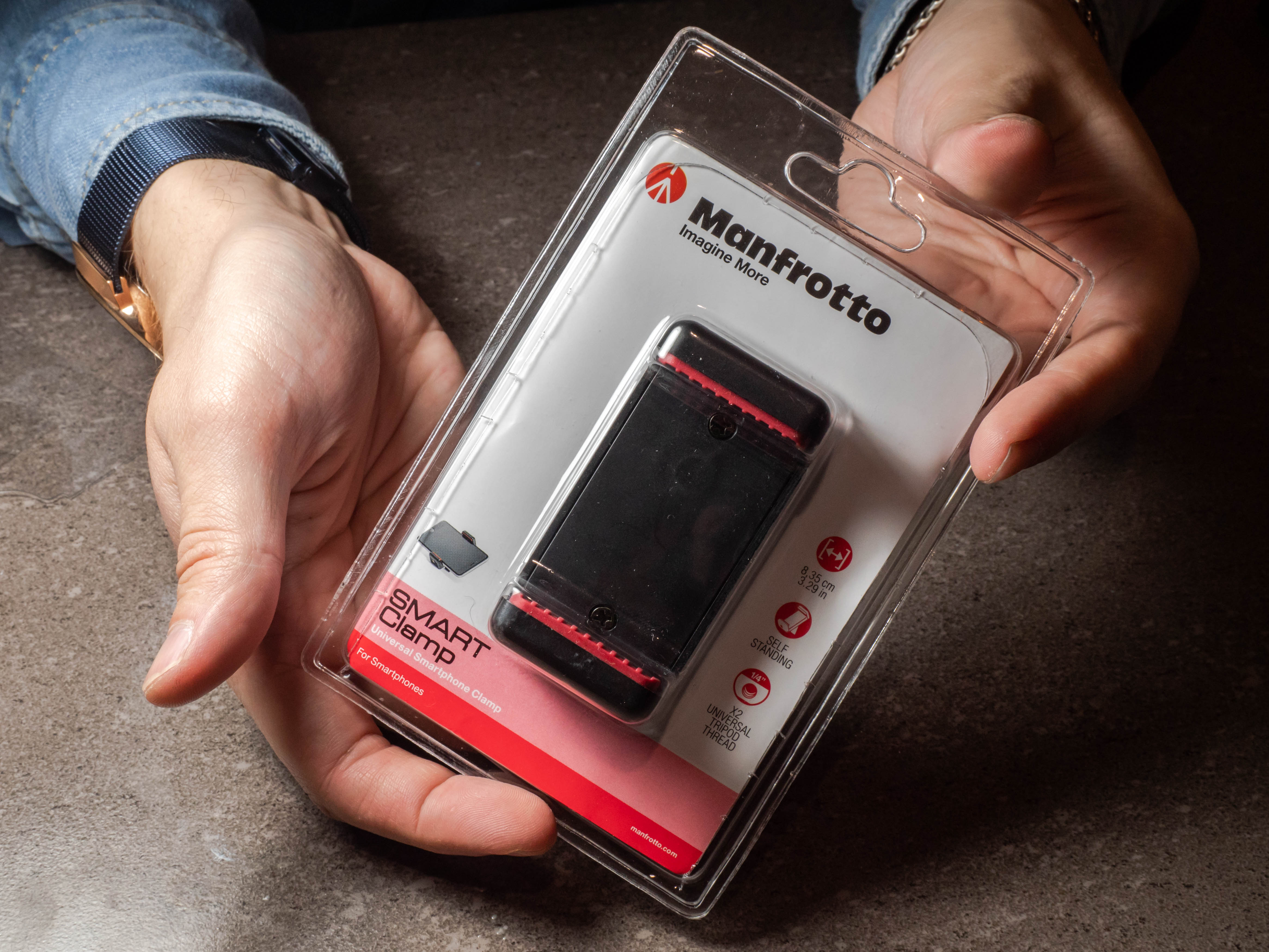 Frankly speaking I can’t even imagine what you can invent for packing such accessory. Here manufacturer decided not to go crazy with weird ideas and used blister packaging. 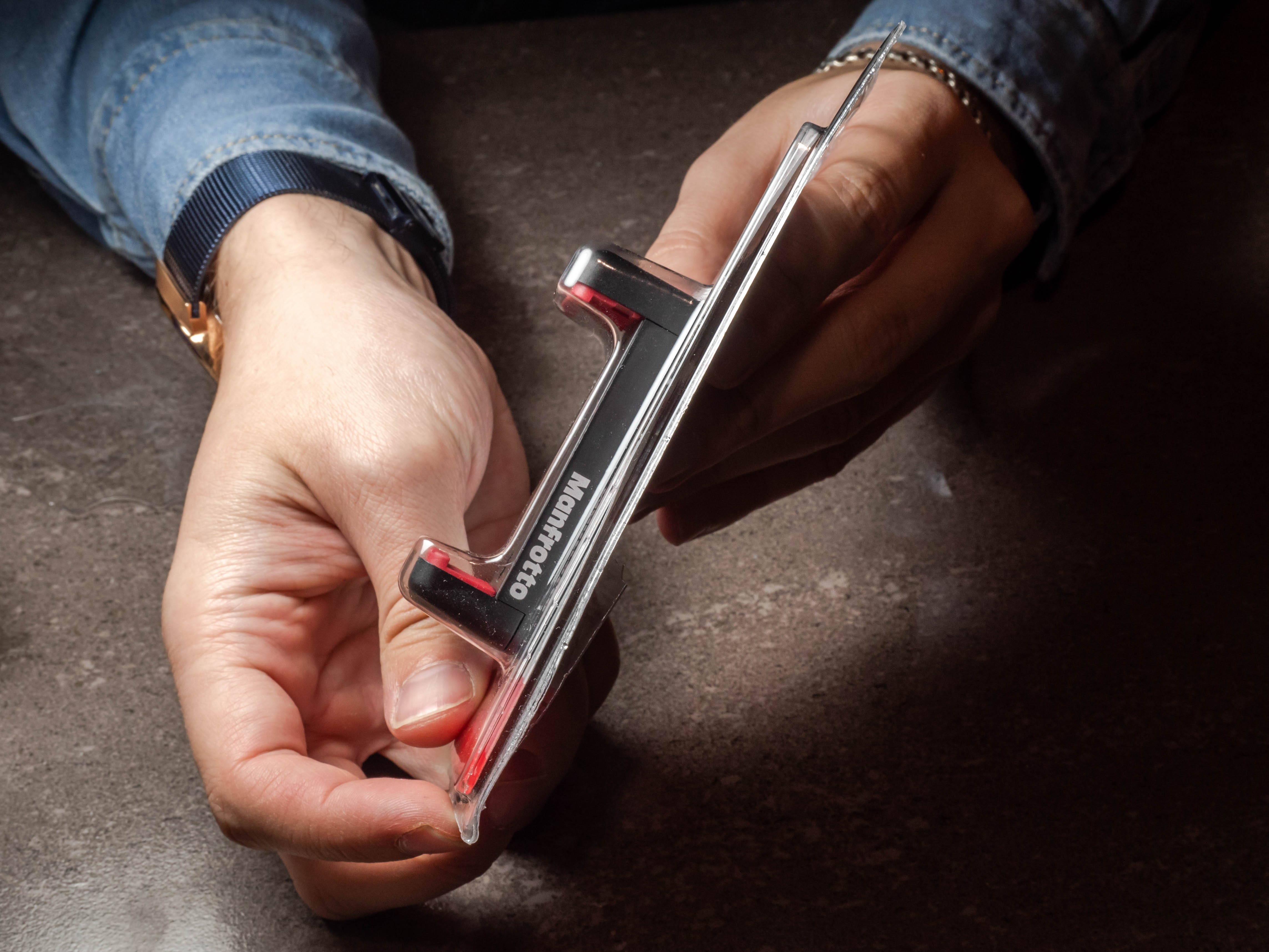 No worries – you won’t need scissors here. Manfrotto cut special holes so that package can be opened with bare hands, and you can see me doing this in the video. 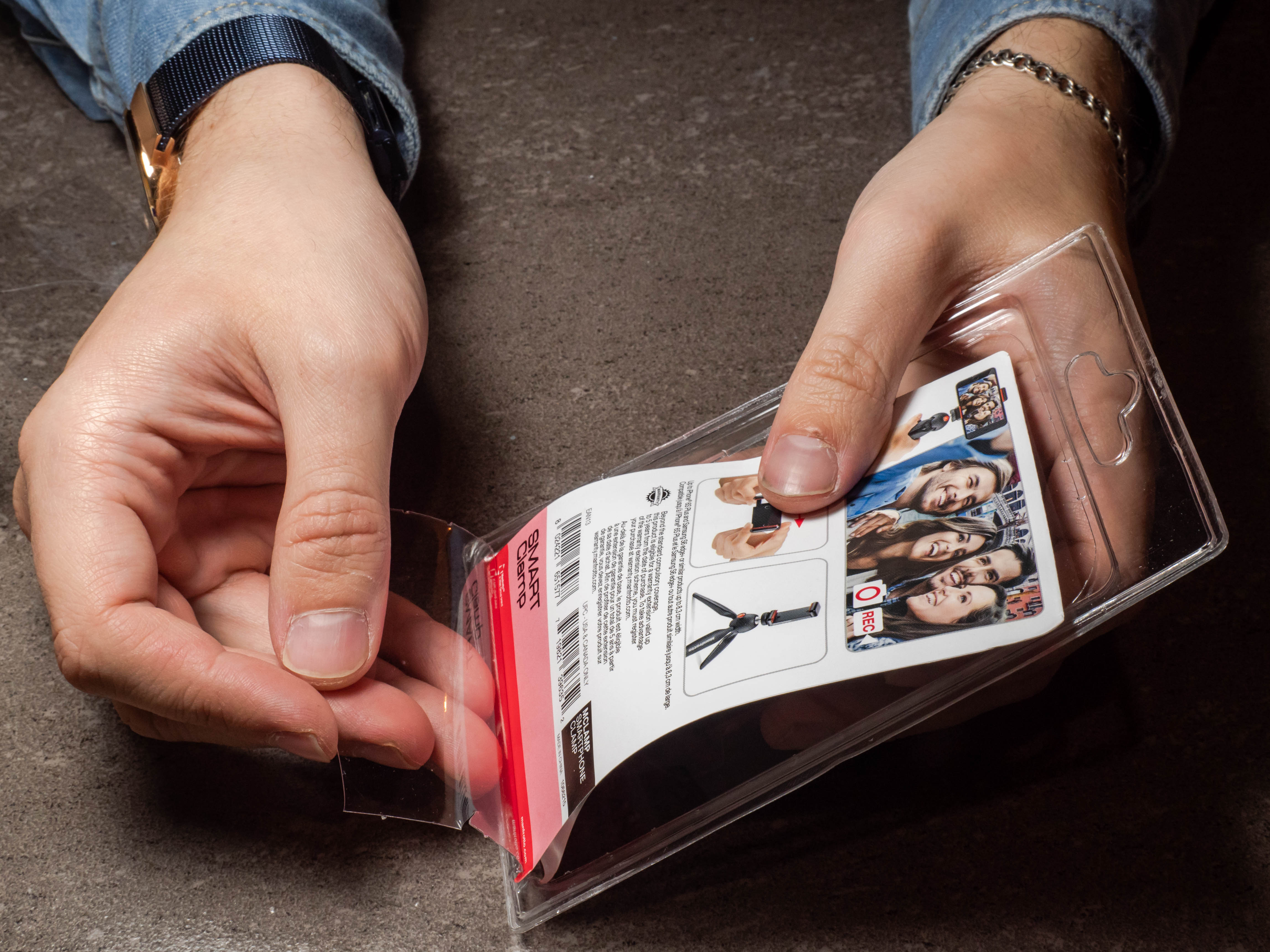 Quite useful feature when you are somewhere and don’t have sharp things with you. Paper insert won’t tell you a lot, but there is nothing to add because product is simple. 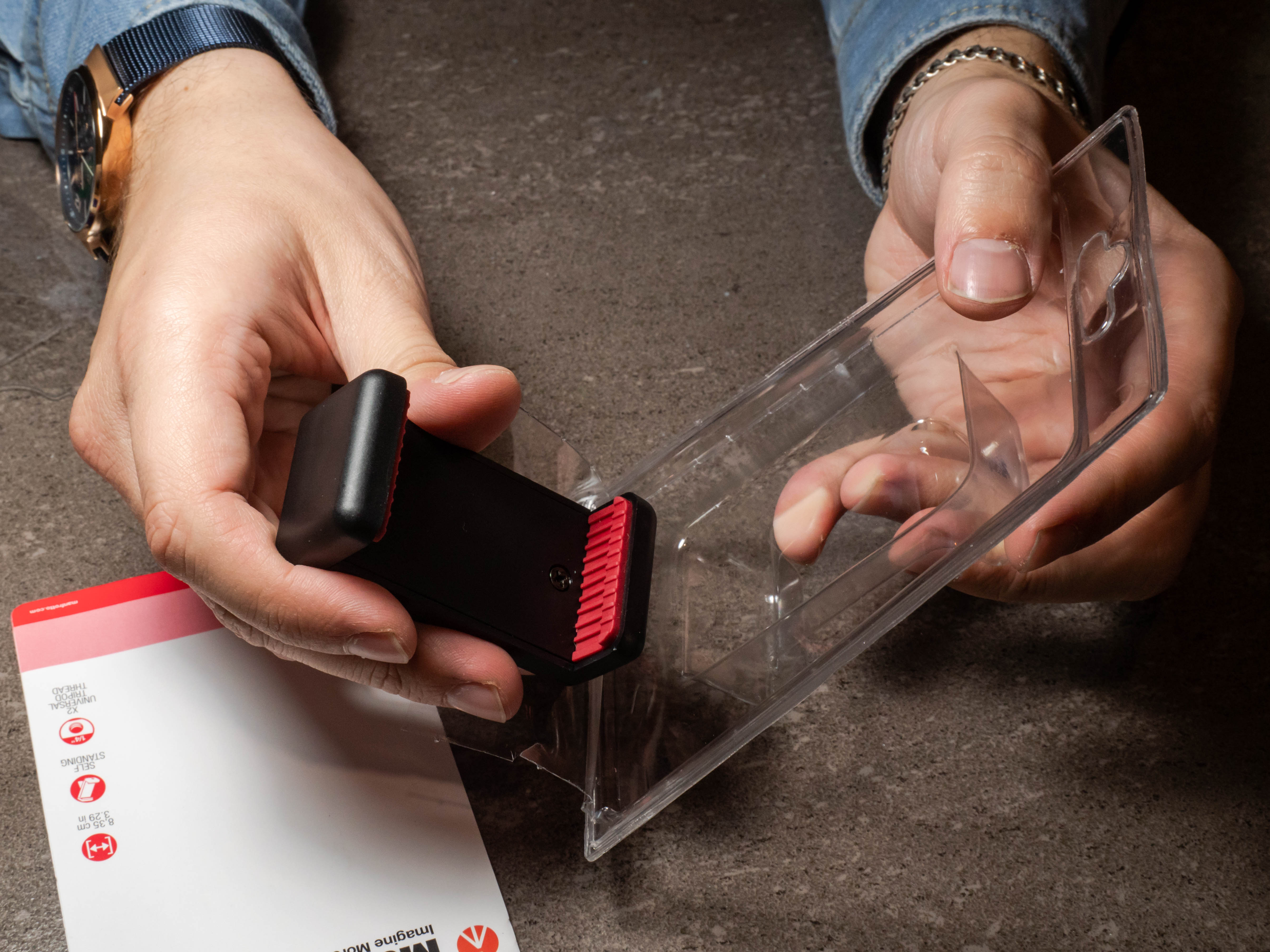 Manfrotto Universal Smartphone Clamp comes in black color with red accents. Whole clamp is made out of matte plastic which should be more scratch-resistant. Note that it is empty inside, so I won’t recommend to put heavy things on this clamp. 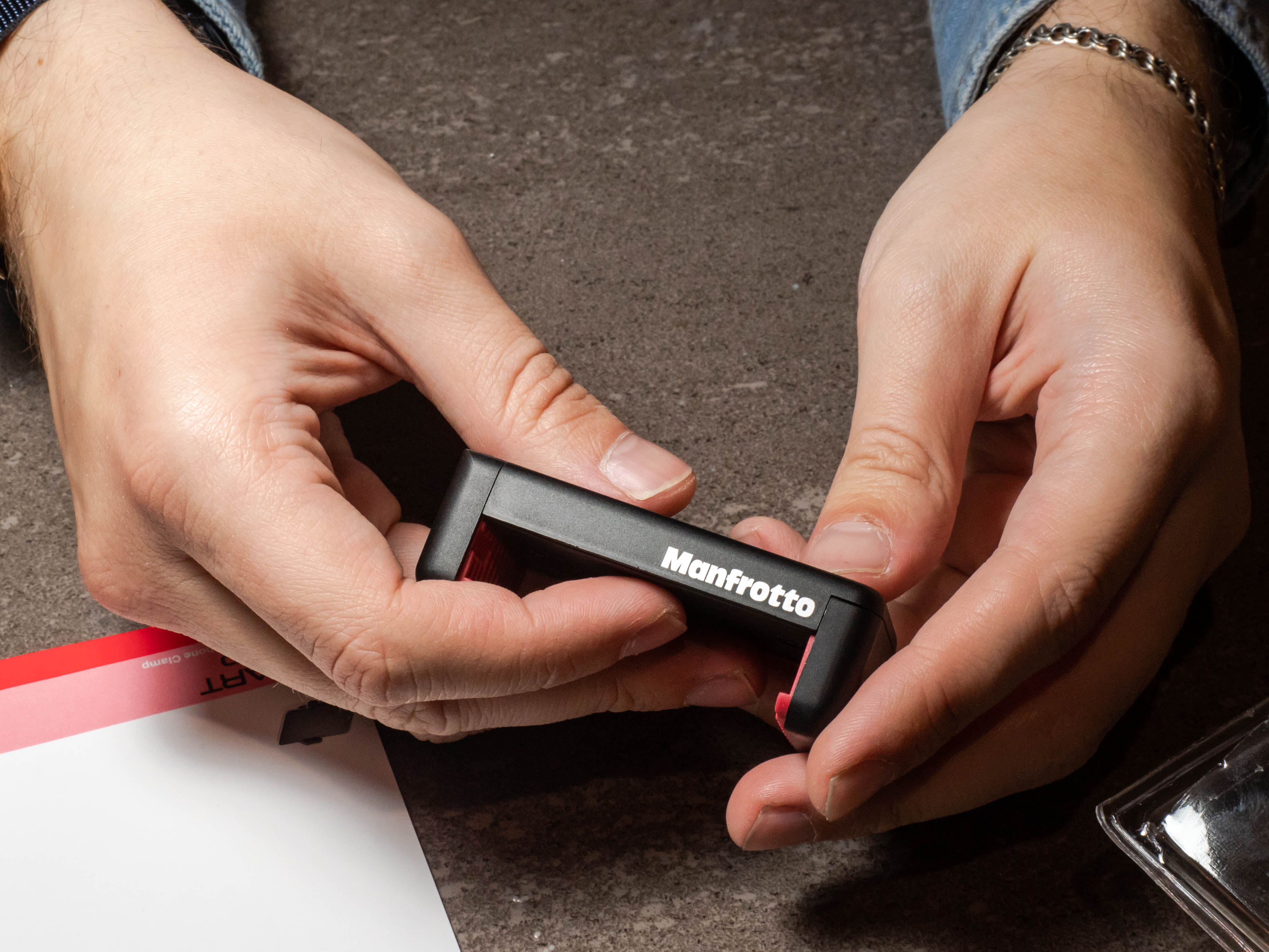 On each “lip” manufacturer placed special rubberized grips, which are slightly raised on the ends. Such design should fix phone in place and you won’t be worried about any movement. 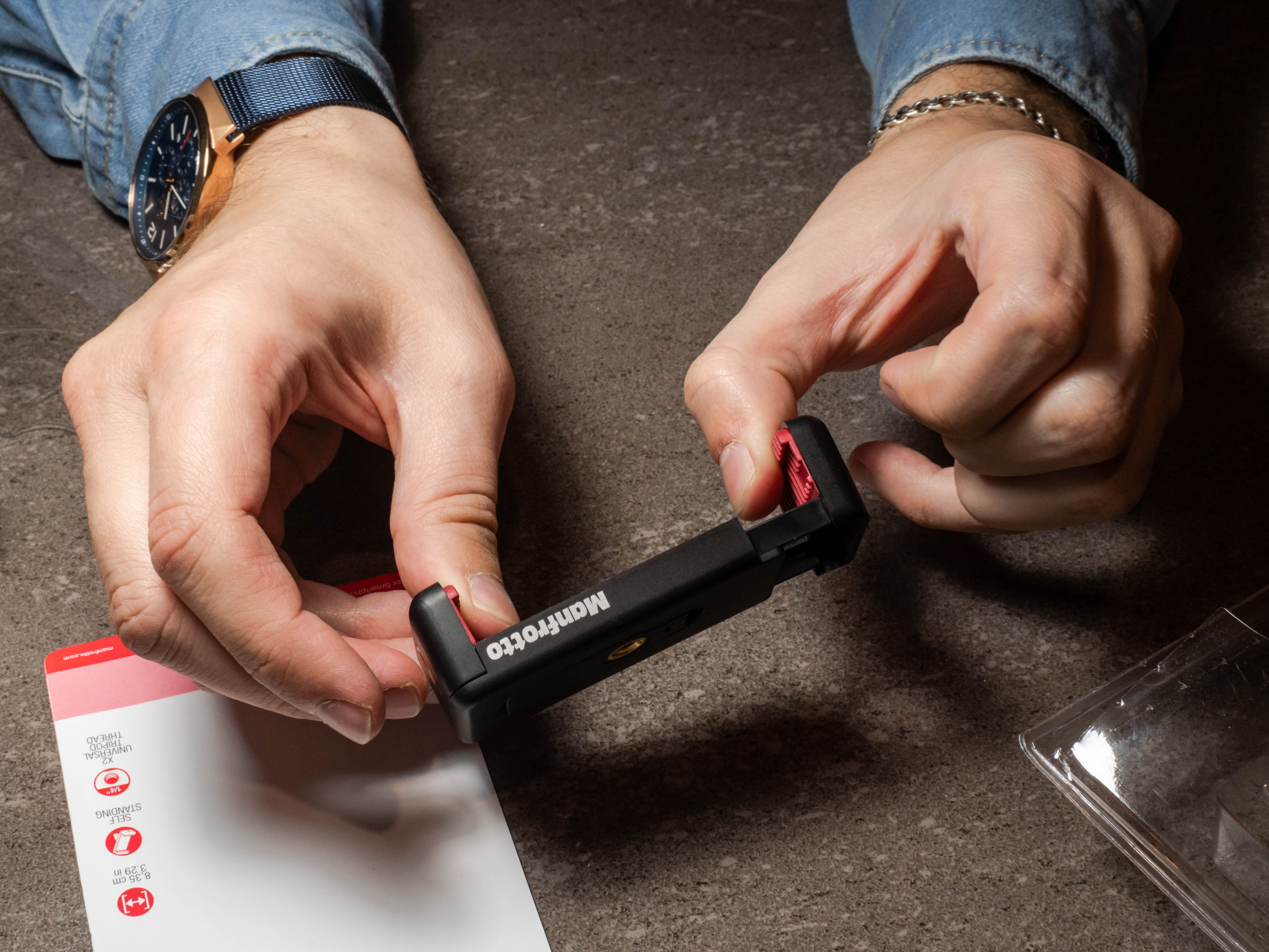 While design is simple, it is also quite simple to use this clamp. Put the phone inside, screw this clamp on the tripod and you are ready to go. Note that there is manufacturer logo on one of the sides. 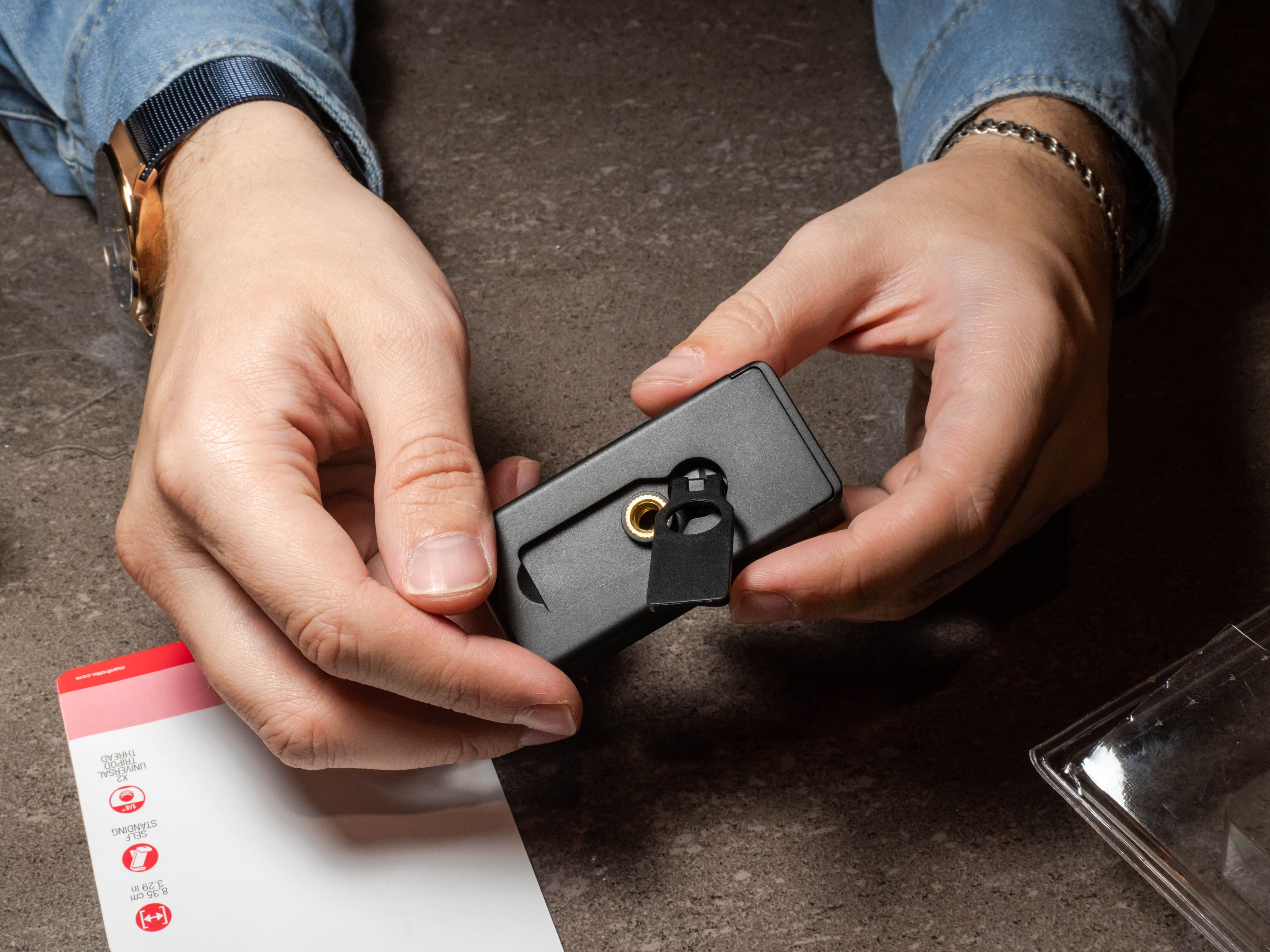 Manfrotto also decided to use not one but two standard tripod threads. Such design should give more freedom in clamp placement. Moreover, there is a kickstand! This thing might be handy for placing your phone on the table. 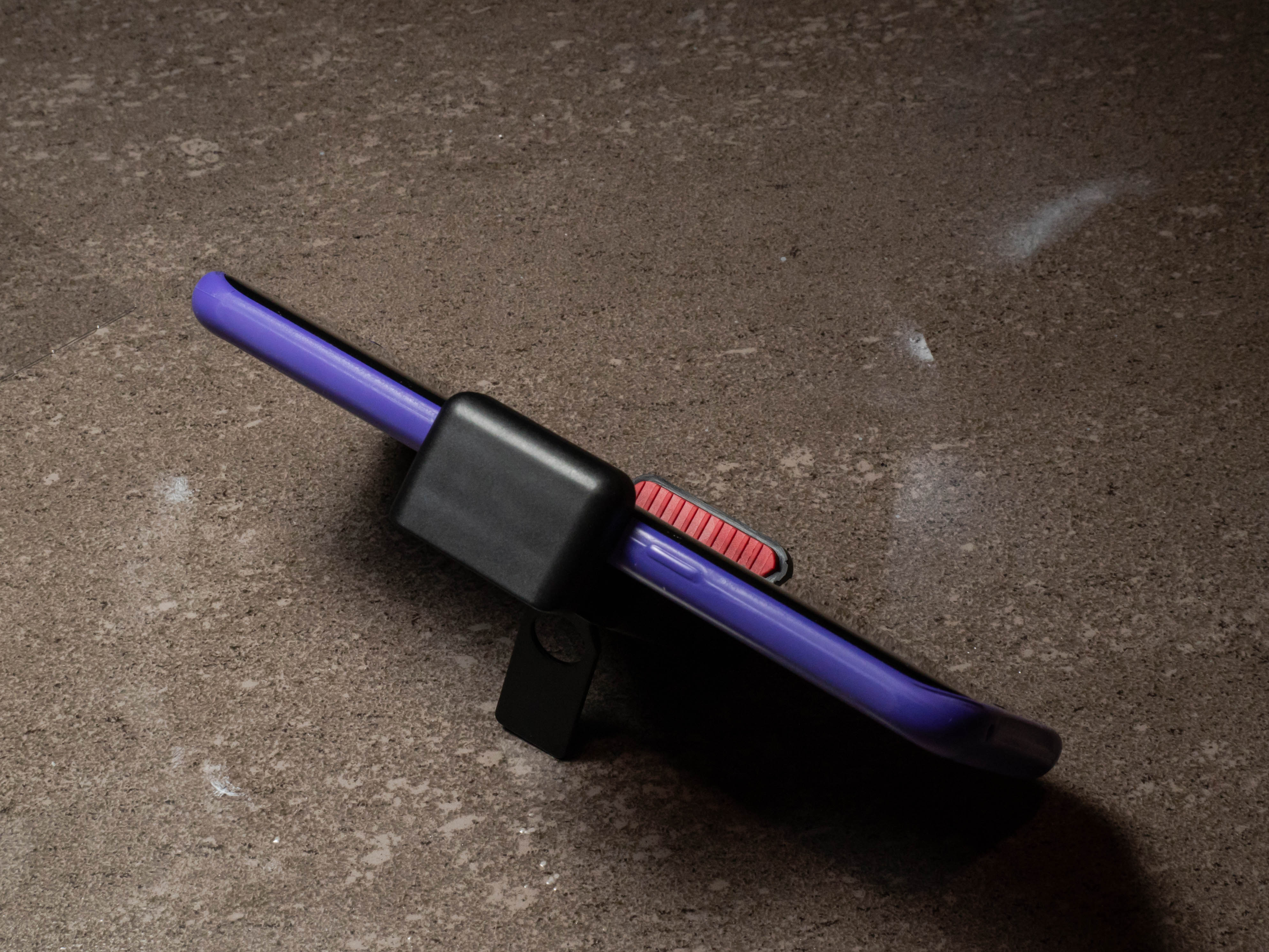 I have Samsung S8+ in original rubber case. It fits nicely into the clamp. Rubber pads firmly hold this phone in place and it won’t go anywhere even after some rough shaking. 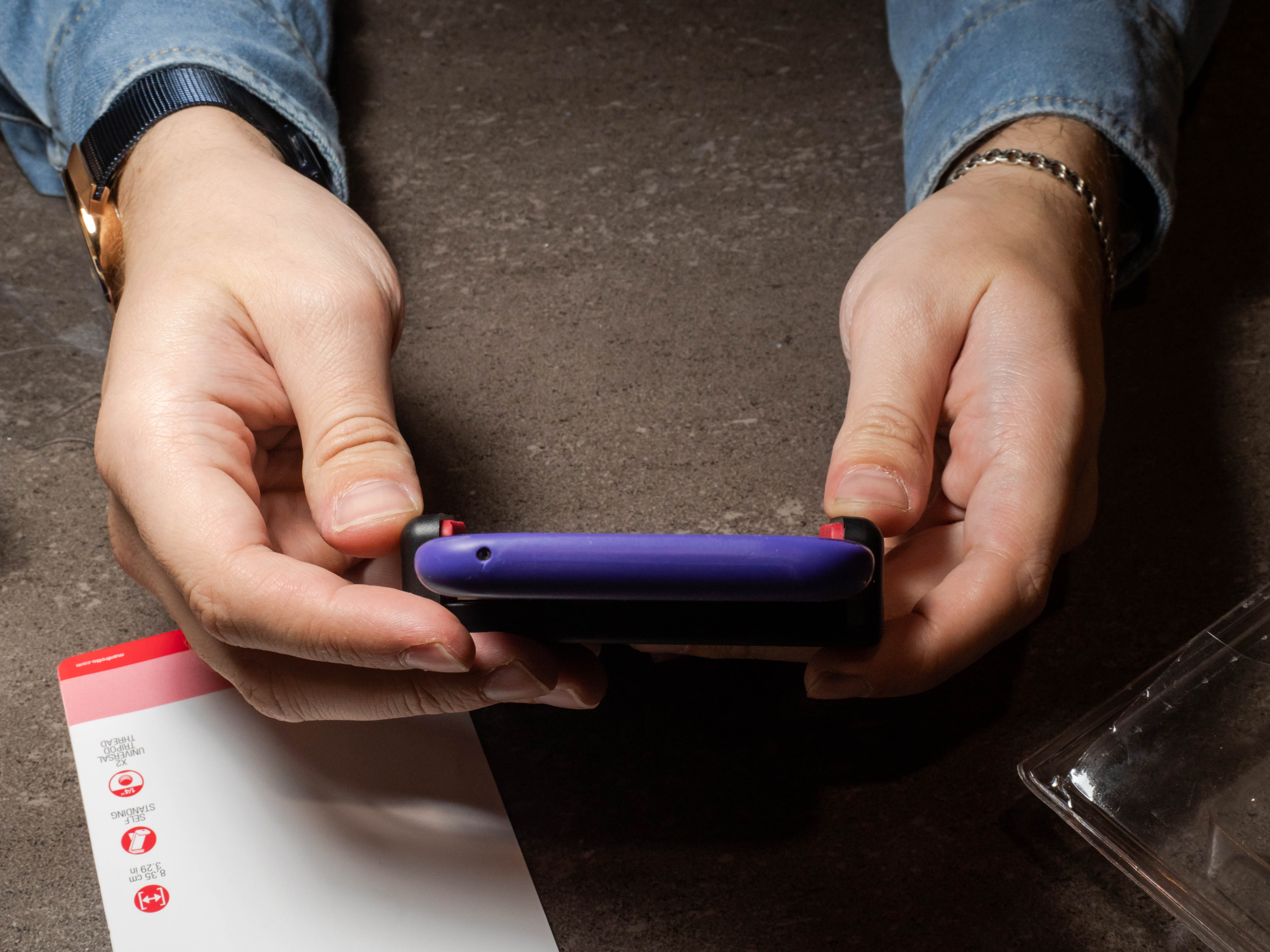 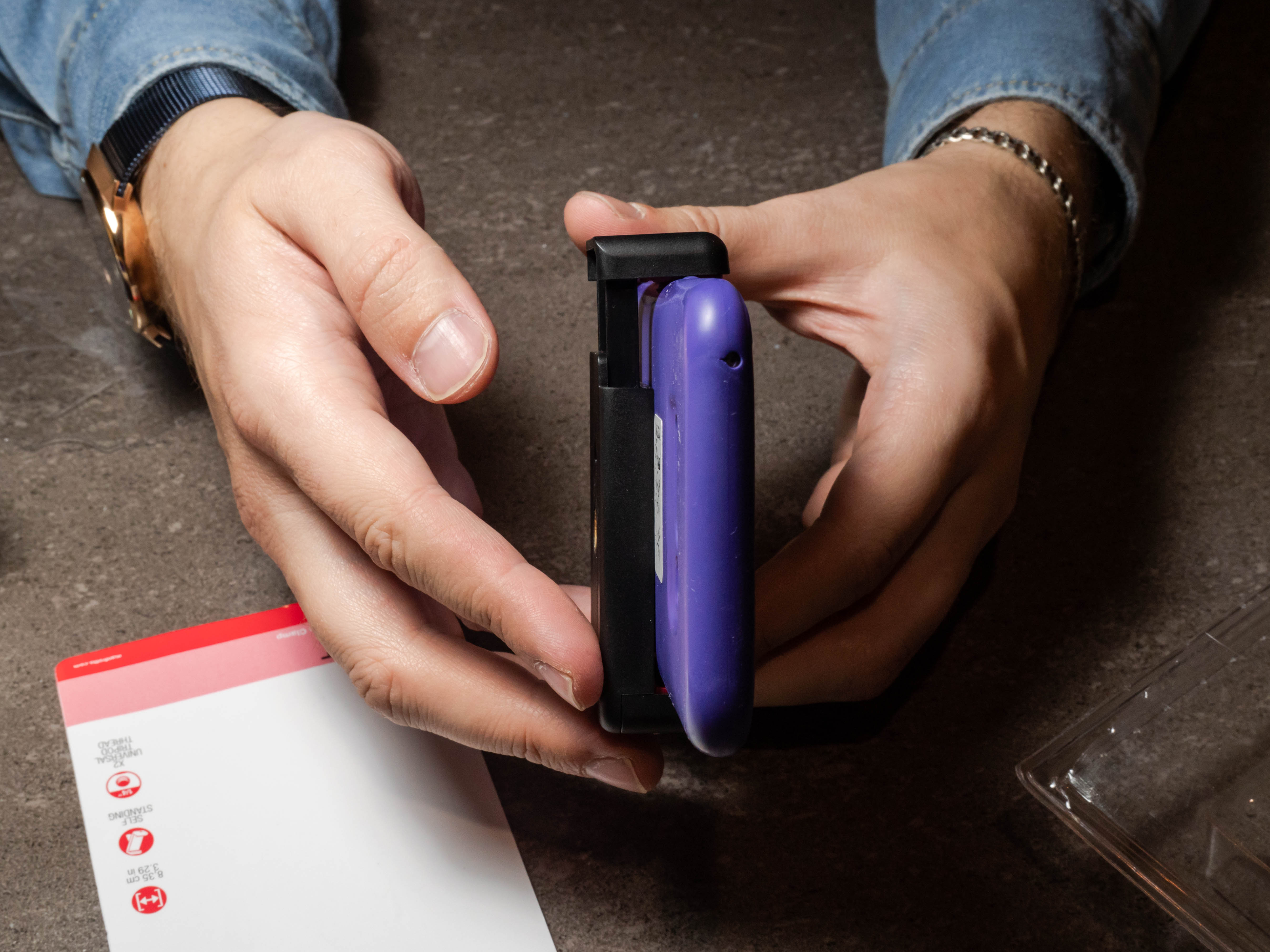 Take a careful look at the photo above. See that slight bend of the top? I guess it will be worse with something bigger, for example, iPhone 8 Plus. Just keep it mind and put phone into clamp before attaching it on the tripod. 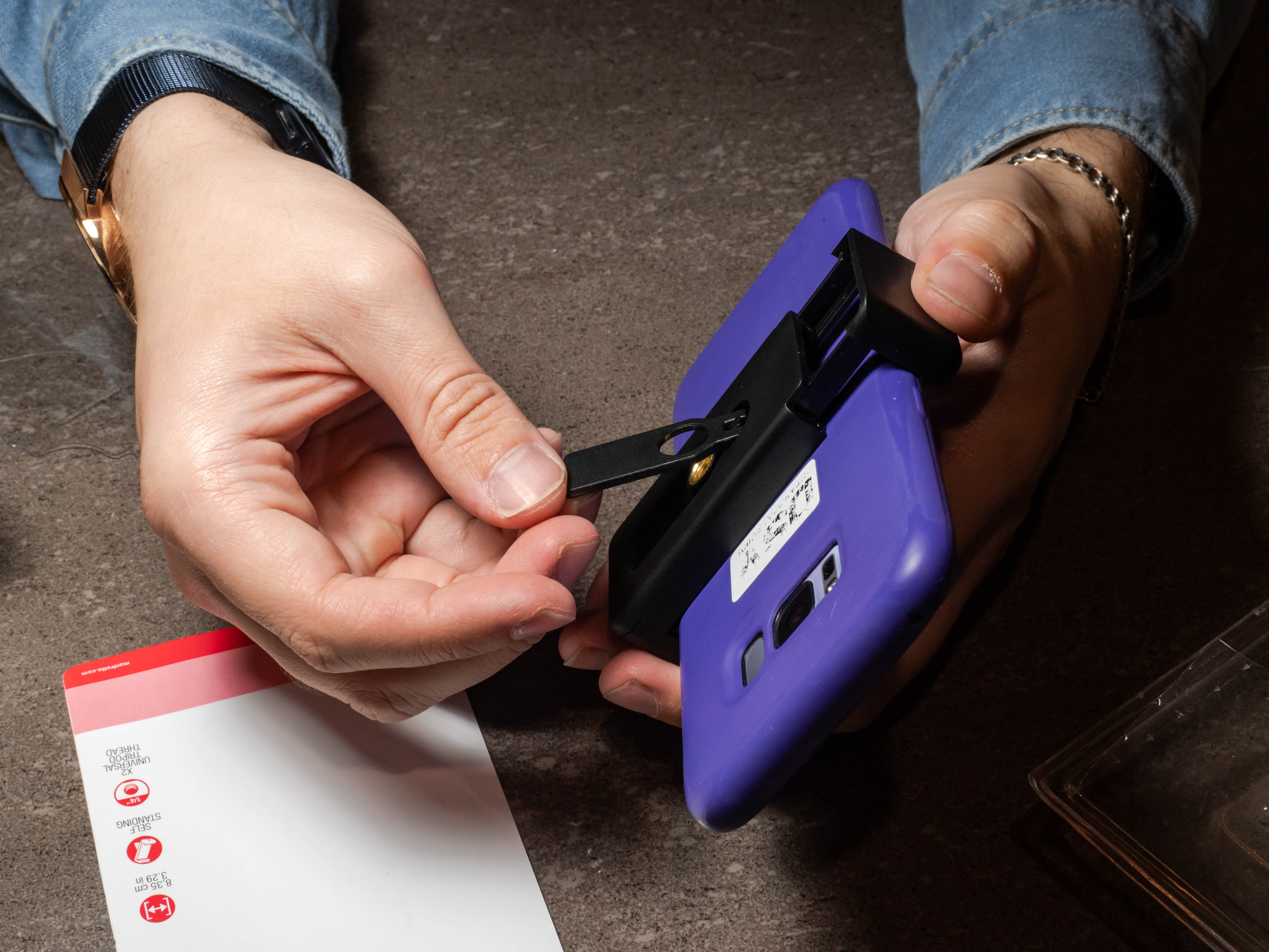 Kickstand will be handy to place phone on the table. I can’t imagine any use scenarios except of watching something on your phone. Well, maybe you can record selfie videos with phone on the table. On the photo below I show that you should be careful while removing phone out of the clamp. Top section can catch your finger and it won’t be a pleasant experience. 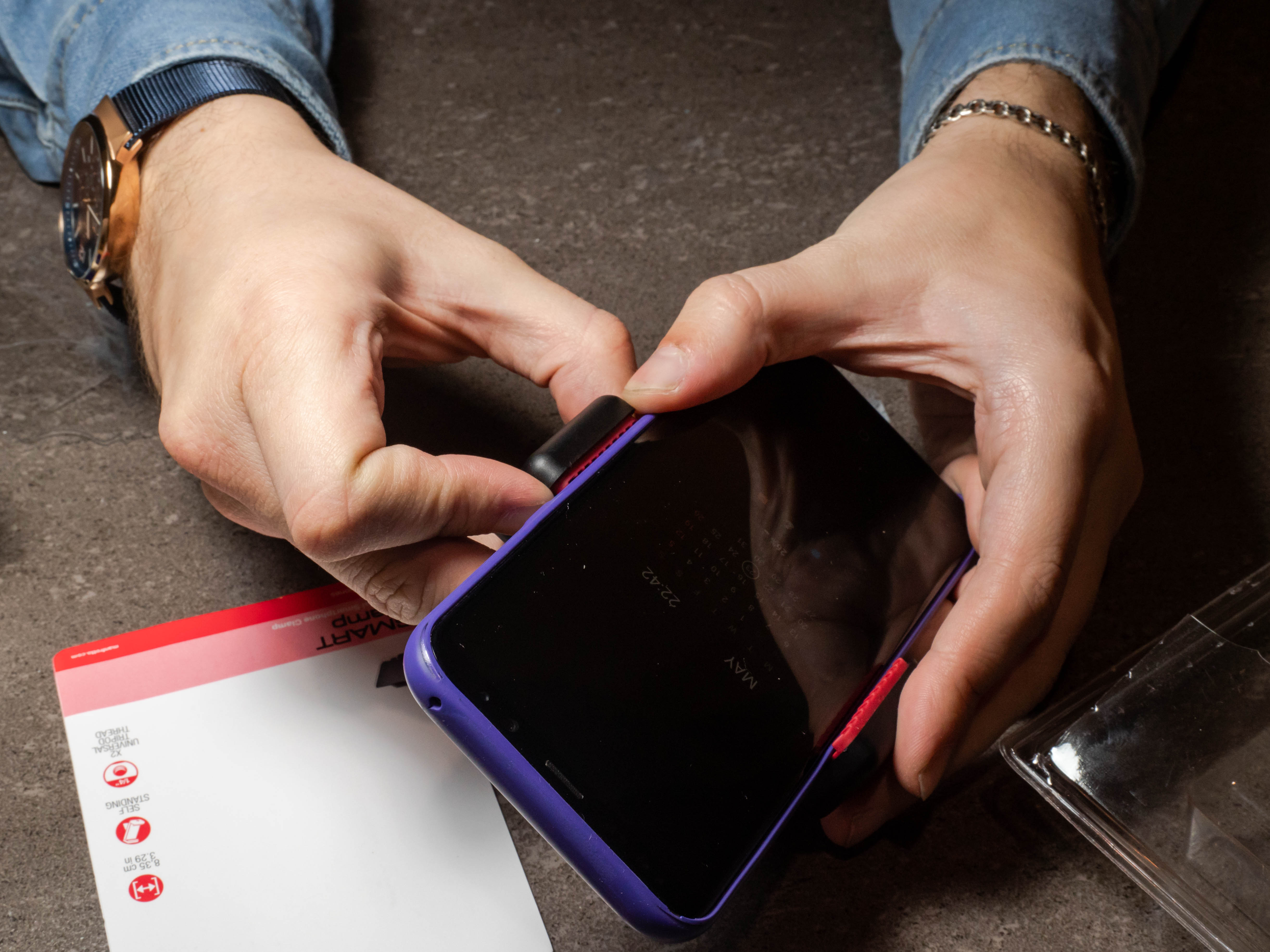 Overall this clamp looks like a nice accessory for those who shoot with their phones. Be it video or photo, Manfrotto product will help you get a steady shot. Moreover, price is quite reasonable and it won’t eat half of your salary. I bought one for myself, so let’s see how long it will work. 🙂

[…] Nevertheless, is this newcomer as attractive as bigger brothers? Let’s take a look. By the way, here you can read article about another interesting thing. Don’t forget to like our Facebook page, so that you can get fresh articles on […]